I will most likely create a new LJ account so I can continue to read the LJs of my friends who still post here.

I have left the comments open, but screened. If you'd like to make sure I friend you on my new LJ account, please feel free to post a comment - no one else will see it.

This LJ will be locked by New Years, and closed shortly thereafter.

"Champion of a Lost Universe" by Scott Reed and Burt Colt (may be a pseudonym, or fictional character?)
The name of his website was "Web's Best Comics"
It began in 2006, possibly... July?

I can't find the comic online, but I'm gonna email the author and ask him what's up.

The name of the evil villain who melts the superheroes from the comic I can't remember was "Dr. Nihilist" and his buzzsaw-wielding robots were called "Nihilist-Bots" or "N-Bots". He looked sort of like baron Zemo / cobra commander and had a big red "N" on his chest (or on the robots, I can't remember)

So, I used to read this webcomic a few years back about a supervillain who WINS and uses his deathray to melt (almost) all the superheroes. Most of the first few issues are about the few surviving heroes trying (and failing) to fight back, and the villains arguing amongst themselves about how they're going to divvy up the earth. The whole thing was drawn in a golden-age comics style, and the official 'story' from the 'publisher' was that the comic was just a reprint of a comic from a company that had gone out of business due to toxic ink. I don't remember the comic's name, or the publisher, but it was really good. Does anyone know what this comic could have been called? It's been bugging me all day.

ISLES! KILL ALL THE TIGERS, THEN SWEEP RIGHT AROUND THE WAREHOUSE, BREAK THROUGH THAT LINE OF WHITE SCARVES, AND TAKE BACK THE PASTRY SHOP.

GOOD JOB ISLES, YOU STOMPED THOSE GUYS INTO MUDHOLES. FUCKIN MUDHOLES. HAVE SOME BUTT-PATS AND TAKE TEN.

ISLES! CLEAR OUT THOSE LEFT FOUR FLAGS THEN PUSH THROUGH THE WAREHOUSE AND REINFORCE THE PASTRY SHOP.

(if you're unfamiliar with the Ramirez joke)

Just an FYI for anyone who might be looking to pick one up on the cheap - and that's about as cheap as it gets.

Why do I think of you when I see these things?

The Mating Ritual of the common Loon. 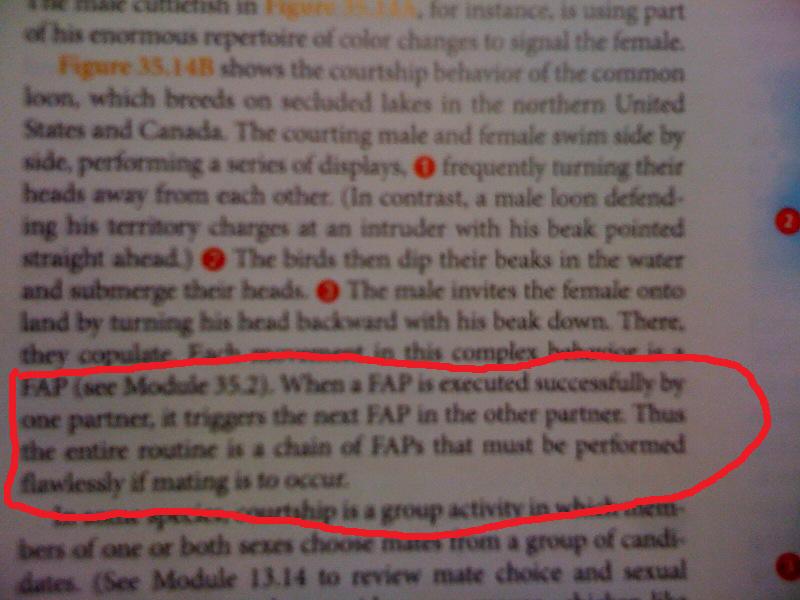 When a FAP is executed successfully by one partner, it triggers the next FAP in the other partner. Thus the entire routine is a chain of FAPs that must be performed flawlessly if mating is to occur

A: "If there's a loving god, why is there war and suffering on Earth?"

B: "Because god gave humans free will"

thoughts from the religious?

People are taking the piss out of you everyday. They butt into your life, take a cheap shot at you and then disappear. They leer at you from tall buildings and make you feel small. They make flippant comments from buses that imply you're not sexy enough and that all the fun is happening somewhere else. They are on TV making your girlfriend feel inadequate. They have access to the most sophisticated technology the world has ever seen and they bully you with it. They are The Advertisers and they are laughing at you.

You, however, are forbidden to touch them. Trademarks, intellectual property rights and copyright law mean advertisers can say what they like wherever they like with total impunity.

Fuck that. Any advert in a public space that gives you no choice whether you see it or not is yours. It's yours to take, re-arrange and re-use. You can do whatever you like with it. Asking for permission is like asking to keep a rock someone just threw at your head.

You owe the companies nothing. Less than nothing, you especially don't owe them any courtesy. They owe you. They have re-arranged the world to put themselves in front of you. They never asked for your permission, don't even start asking for theirs.

I just bought the Company of Heroes Complete Pack for $30... today only on Steam. And I convinced

shockwavesix to buy it too, so here's hoping we can start playing some multiplayer soon.

Also for those of you who appreciate Civilization IV, check out the Civ IV Complete Edition for $20 on Steam.

Now, I go to play Brutal Legend with Sam. The bass is all the way up. The intro alone is epic.
Collapse